skip to main | skip to sidebar

I got uR drugz 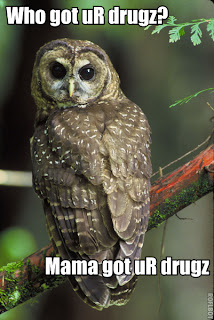 Fidel is having some crazy dental issues with two teeth this week. A crown popped off of one and can't be fixed without having his jawbone shaved down, and another crown attempt failed so he has to have a root canal. If you have been married to man, you know that when they are sick, have surgery or dental work, the humane thing to do is to fill them up with pain medicine and get the Hell out of Dodge. Well that may be humane for just one party involved but abandonment is much better than strangulation or stabbing. Unfortunately I can't leave town this weekend because I have a commitment tomorrow morning. My plan is to keep him drugged up and sleeping this weekend until he can have his root canal done on Monday and he should be ok until the next week, when he's having his gums cut off and his jawbone shaved down in preparation for the crown repair. That, my friends, is when the abandonment will begin. I'll leave him with his pain meds and some Slimfast shakes since he won't be able to chew. Now before you think I'm callous, remember that we have two children and I will be taking them out of his hair so that he can rest. Callous would leave the kids with him and head out for a girls' weekend.

Jennifer
The 'burbs, Georgia, United States
Mom to 2 princesses, wife to Fidel. I love celebrity gossip, cruise ships, cooking and eating, sparkly cocktails with fresh mint, wiener dogs and chihuahuas. I love comments and the more I get, the more I post so if you like reading my crap let me know and I'll keep writing.